Welcome to a very strange hobby....

.... and the home of Thomas, Lord Grey's Regiment of Foote

Lord Thomas Grey's Regiment of Foote is a parliamentarian regiment of the Sealed Knot society.  Nowadays people groan at the mere mention of parliament. However, back in the 1640s during the English Civil War, parliament stood up for the rights of the common man against a King who would hold absolute power over them all - a King that would declare war on his own people, his own land!  Parliament, and the men who fought for it, would be branded traitors and rebels for their defiance.  To these men defeat was not an option: they had taken up arms against their King and to lose or back down would guarantee them a spot on the executioner’s chopping block for making a stand.  Lord Thomas Grey was one of these men, and it his regiment we portray in battle and memorial.

Re-enacting the battles of the English Civil War 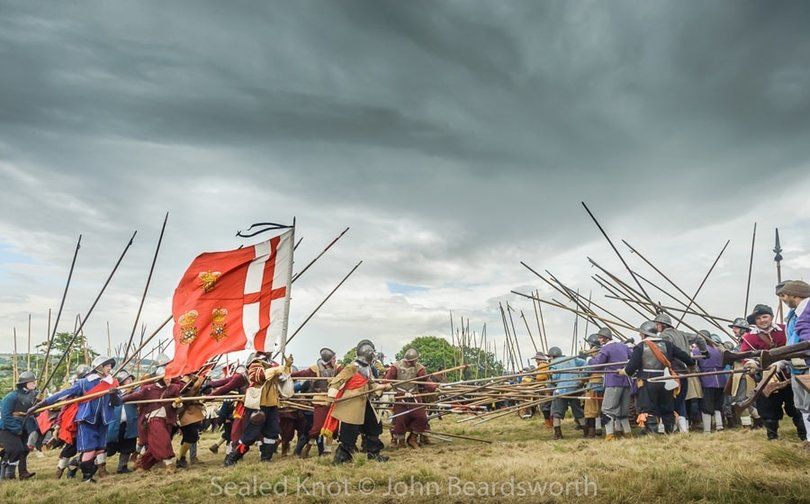 Why we do it

To an outsider, what we do must seem very strange: groups of people dressed in odd clothes, meeting up in muddy fields and fighting each other.  However, there is something enthralling about watching a Sealed Knot battle. Maybe it's the fact that everything seems so different - the clothes, the tactics and antiquated weapons - and yet there is something so familiar.  The names of the battles and sieges are all places we use in everyday speech today.  The English Civil War touched every corner of this land, and most major towns and cities will have some form of Civil War history.  Despite this, it is not commonly remembered, but members of the public leave a Sealed Knot event knowing that the road they travel to work on was the scene of a bloody ambush or, in the case of Leicester, the market where people buy their fruit and vegetables was where the townsfolk who had taken up arms against the King made their final stand during the siege of the city in 1645.  It is this realisation that we love to kindle in people.....And have a great time doing it!

A little About us

As Thomas, Lord Grey was a Member of Parliament for Leicester, and lived in the area, our modern day recreation of his regiment is based around there.  However, that does not mean that if you live further afield you cannot join us.  On the contrary, we have members from all parts of the country.  This is an advantage because Sealed Knot battles take place all over the UK and having members in all areas ensures that the regiment will always get a consistent turnout wherever we go.   We are a friendly, family orientated regiment, some of our members having been in since childhood!  There is nothing like the camaraderie we share within the regiment and laughter is a common sound on the campsite, with the social side of the hobby being as much a draw to members as the actual displays.  Our regiment takes part in everything, from large-scale battles to small historical talks and living-history displays.  If you fancy having a go yourself, don't worry, you don't have to be a history professor to get involved and we give you full training in the drill and use of the weapons of the period.