An introduction to some of the people in the regiment

Here you can find information on some of the officers who look after the regiment and it's members, and of course some info on the man himself! 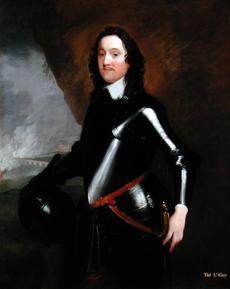 Thomas Grey, Lord Grey of Groby (c. 1623–1657), was an elected Member of Parliament for Leicester during the English Long Parliament, an active member of the Parliamentary party and a regicide. He was the eldest son of Henry Grey, 1st Earl of Stamford, using his father's as his own courtesy title, and Anne Cecil, daughter of William Cecil, 2nd Earl of Exeter.

In January 1643, during the First English Civil War he was appointed Commander-in-Chief of the forces of the Parliament in the Midland Counties and Governor of Leicester. In 1648 he won some credit for his share in the pursuit and capture of the Duke of Hamilton; he assisted Colonel Pride in purging the Parliament by helping to identify members to be excluded. Later, in 1648, he was made commissioner of the court which tried King Charles I. His signature on the death warrant indicates that he was a strong advocate for the execution of the King, because he signed after the President of the court John Bradshaw and before Oliver Cromwell, who was third to sign out of a total of fifty nine commissioners (judges) and was the only person of nobility to sign the death warrant.

A member of the Council of State under the Commonwealth, Lord Grey of Groby fought against the Scots in 1651 during the Third English Civil War. A supporter of the Good Old Cause, in February 1655 during the Protectorate he was arrested on suspicion of conspiring against Cromwell who was by now Lord Protector, but he was, however, soon released. He predeceased his father in April or May 1657. 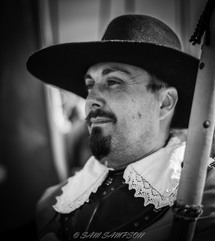 I've been in Lord Grey's regiment for about 14 years and was with the regiment when  it got full regimental status. I mainly take part in the battles as a pike officer, but when I can you will always find me fighting in the front row of the pike.  I also take part as a musketeer, this is mainly at small one day events and memorial marches, where a big bang always goes down well!!!

I am a Captain within the Sealed Knot and CO of Thomas Lord Grey's regiment, which involves making sure the Greys know what is expected of them during a Sealed Knot muster. Like when to form up for battle, if we have any Drill or parades  and making sure new and old members are trained in their chosen activity. I hope to also try and make sure that all Greys members enjoy their  time in the Sealed Knot. 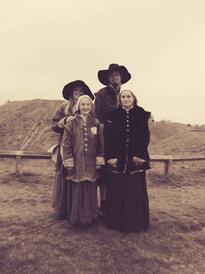 I had to taken my family to go and watch a Sealed Knot event at Newark in 2016.  We enjoyed what we saw so much that joined the society that very weekend. I started out as a Pikeman and my wife joined the baggage trayne, helping to keep us all watered in the heat of battle.  My daughters became apprentices at armes, learning the skills involved with the various weapons and when she came of age, my eldest daughter joined me in the pike block.

Numerous battles and many events later, we have forged many fantastic memories and made many great friends. Recently I had the honour of being promoted to Second in Command of or Lord Grey's. 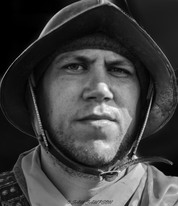 I joined the Sealed Knot originally in 2009 at York Racecourse from recommendation of our Pike Corporal Matt as a temporary member. After this event I just had to join permanently. The regiment welcomed me as part of their family and to this day I describe the regiment as an extended family. I enjoy all aspects of the Sealed Knot from the battles, memorial marches and of course the socialising in the beer tent and around camp. My role as Sergeant on the field is to give orders to the Pike Block, liaise with other Officers and make sure members in the block are safe and well. It is a great hobby and a fantastic way to relax and unwind after a busy (or not so busy) week at work meeting people from all different walks of life. I would definitely recommend joining the Sealed Knot to anybody! 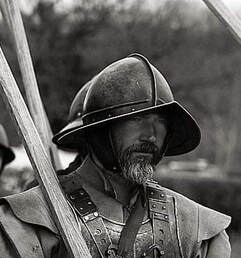 I joined Lord Thomas Grey's regiment at Belvoir castle in 2008, I had the intention of trying both arms on my first muster.  I did pike on the first day and got so addicted to it that I haven't done any other arm to this day.  I enjoy all parts of the hobby from the battles and commemoration, to engaging with the public.  On the battlefield my job is to relay orders given from Simon or other officers to the rest of the pike block and to guide the block during our pushes. I also train new members in the drills and manoeuvres of the pike and watch over and guide them during the re-enactment so they can enjoy the battles as they can be a bit daunting at first!  I love being a member of the regiment as it's like having an extended family, my partner and children just love to get away from the hustle and bustle of daily life, get dressed up in strange outfits and relax (often in the grounds of some impressive stately homes and castles) with the truly great friends we have made in the regiment and the society as a whole! 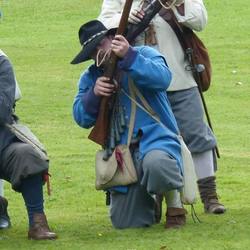 I was introduced to the Sealed Knot by a friend of mine who kept suggesting I would enjoy it. My first muster was at a place called Wentworth Castle, where I started my training as a Musketeer.

I've only been with Greys Regiment for a short time, but I was welcomed with open arms from my first event and feel like I'm part of each members family. I know I wouldn't want to do anything else on my free weekends.

The Sealed Knot is a great way to meet new and interesting people, as well as seeing and staying at some of the best beauty spots Britain has to offer. I've made some really good friends and I'm making more all the time.

Words from our younger members 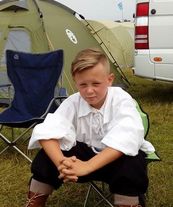 I love being part of Lord Grey's regiment, as the members are always really nice and teach me about the battles , weapons and how to fight in the civil war period. I love to get out into the fresh air with everyone and sit around the campire cooking endless amounts of food. I also like dressing up in the 17th century costumes as it alows me to represent the sealed knot and it also keeps me warm throughout the day. As a child I have enrolled into the apprentices, learning lots about pike and musket, so looking forward to being a pike man in 4 years time as my Dad and many friends are Pikemen. This makes me so eager to join the pike block! 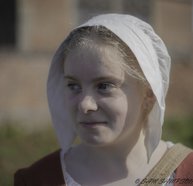 Me and my sister really enjoy the Sealed Knot. We love being in Greys and have loads of fun and really enjoy watching them battle. Even though we can't take part in the actual battle, we do enjoy going to the apprentices and having a go at pike and musket drill ourselves. At night it gets really fun as at the big ones we can go to the beer tent and have a really awesome time. Also at the really big ones we have a fancy dress party and we have loads of fun. We all enjoy getting ready for the barbecue and everyone sitting around the camp fire. I wouldn't like to be in any other regiment as this one is the best!
Powered by